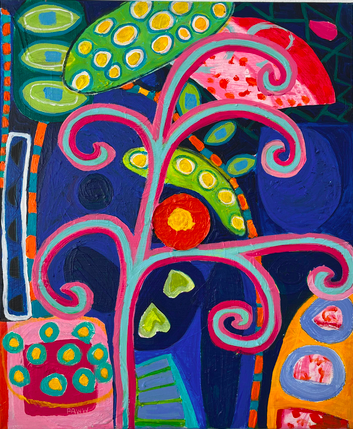 We are pleased to present a solo show by the artist Petrina Wright, who resides in Mallorca since 2003. Her work focuses on the colour and vibrancy of life and is influenced by the surroundings, the objects discovered by chance in the sea and on land, all reflecting the colour and design of Mallorca, as well as her previous life in the Caribbean Islandof CaymanBrac, where she lived and worked for ten years.

The experience of being alive and responding to sight and sound is the basis of what Petrinadoes. She is interested in the chance encounter, the interaction of colour and shape of things seen only fleetingly in a passing moment. Wright collects pieces of things; discarded fragments that are often man made, dropped in the road or washed up with the tide. Each item has caught her attention for different reasons, colour being the main attraction.

Petrina Wright processes and rearranges, reflects upon and re-orders these objects and experiences, creating a vocabulary of images she uses again and again. Some of these are illustrated in the painting called Key, which is like a key on a map; only in this case it is a key to the paintings. Petrina keeps collections of the found objects and draws or handles them as sheworks, initially drawing and creating collages from painted papers and developing ideas afterwards.

She often works in a series of pictures, developing compositions by mixing up the objects and experiences from different places. The shapes reoccur and transform or simplify, slipping between paint to metal or print. She works on large-scale hangings made on recycled canvas awnings using acrylic paint as well as oils on stretched canvas, collage and mixed media on a smaller scale. The canvas wall hangings are meant to be hung like tapestries, although they can be framed. Wright likes the idea of them being easily transported, rolled up to move with us like Bedouins travelling in the desert.

She uses printmaking in various forms, including silkscreen and relief printing. The steel sculptures Stacks are part of exploratory work in three dimensions and are often topped by a bird, caught in the moment when he flies to the top of the tree in the evening to sing. The objects from the Shorelines exhibit are connected to the sea around Mallorca, but include some images from Cayman Brac in the Caribbean and things seen while visiting Aldeburgh in Suffolk.